In 1890 Mr. Jacobus Johannes Louw bought the farm Springboklaagte, as well as the property now knows as 21 Viljoen Street. He wanted to build his dream house here. The house only finished in 1896. He wanted to build a unique house to meet his requirements of a big family of 12 children, himself and his spouse.

Mr. Louw never went overseas to see Victorian or colonial styles, so he had to make use of a well-known local designer. During the Boer-war, Mr. Louw was sent to India as a prisoner of war, and during his absence, the British invaded Middelburg. The house was occupied by British troops and was used as a hospital. It was later also used for military purposes as an officer’s mess, and to serve as annex for the house General Jan Smuts. This was in force until General Jan Smuts moved to Doringlaagte, now known as Irene.

The next owner was Mr. and Mrs. Le Roux who sold to Mr. Mrs. Hammond. It was then sold to the 5th owner Mrs. Gouws. The foundation for the Guest House was dug in 1998. The property has now been recently sold to Mr. and Mrs. De Villiers who owns the property next door, 21 Viljoen Street.

In 1988 Mr Hammond subdivided the premises and sold it, which led to the stables and wagon house on the northern side, and the small living quarters known as the cottage, on the southern side, falling in the sold part. 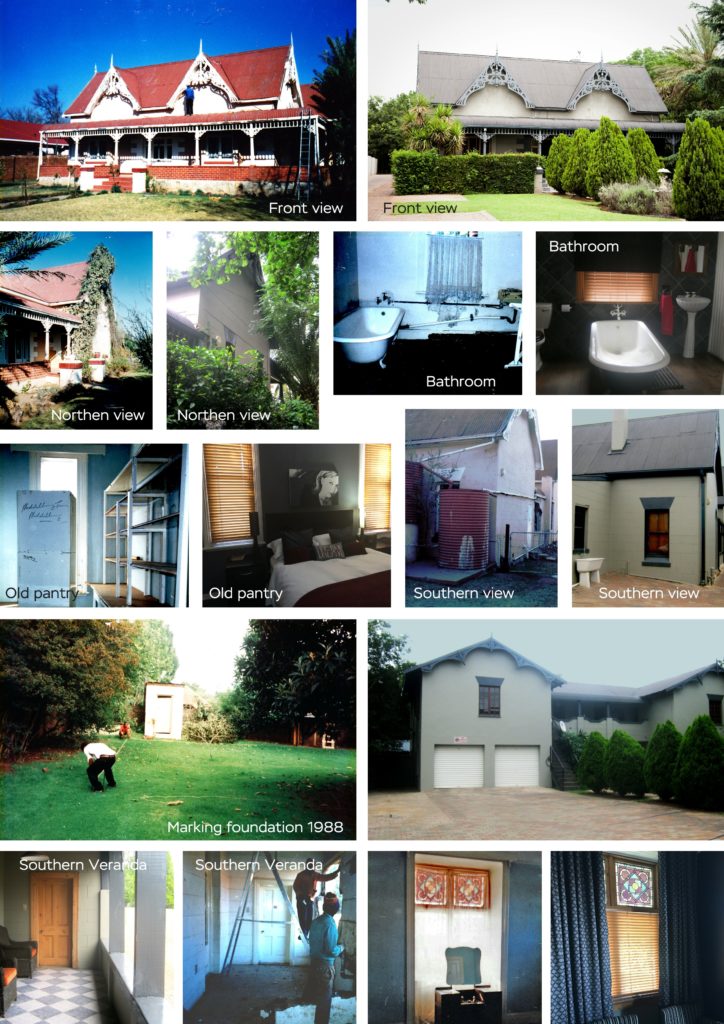 Copyright © 2021 The Gables Guest House
Powered by MidLink
We use cookies on our website to give you the most relevant experience by remembering your preferences and repeat visits. By clicking “Accept All”, you consent to the use of ALL the cookies. However, you may visit "Cookie Settings" to provide a controlled consent.
Cookie SettingsAccept All
Manage consent

This website uses cookies to improve your experience while you navigate through the website. Out of these, the cookies that are categorized as necessary are stored on your browser as they are essential for the working of basic functionalities of the website. We also use third-party cookies that help us analyze and understand how you use this website. These cookies will be stored in your browser only with your consent. You also have the option to opt-out of these cookies. But opting out of some of these cookies may affect your browsing experience.
Necessary Always Enabled

Performance cookies are used to understand and analyze the key performance indexes of the website which helps in delivering a better user experience for the visitors.

Analytical cookies are used to understand how visitors interact with the website. These cookies help provide information on metrics the number of visitors, bounce rate, traffic source, etc.

Advertisement cookies are used to provide visitors with relevant ads and marketing campaigns. These cookies track visitors across websites and collect information to provide customized ads.

Other uncategorized cookies are those that are being analyzed and have not been classified into a category as yet.